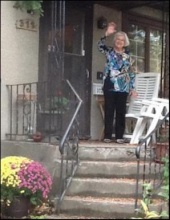 This is a woman who fled invading troops on foot across Austria during WWll, became a stellar mother and grandmother (and great grandmother!), and who on her 90th birthday was still up for a game of ladder toss with her grandkids, out-scoring them to her great surprise. In younger days she and her late husband Jack (d.1999) enjoyed an epic camping trip all the way to the west coast of Canada and the U.S., revisited the site of their marriage in Austria, and spent many winters in Florida, Cuba, and the Caribbean. Later, as a widow she persuaded friends to join her in Portugal and Tunisia. Even at 93 she never lost her curiosity about the world, travelling to Cape Breton to see the east coast while she still could.

For a shy person Alina certainly had a lot of good friends, and she was the quiet centre of every raucous family gathering. It should go without saying that we will miss her, but we’ll say it anyway: we will really miss her and we count ourselves lucky to have had her stories, her laughter, and her love. We intend to gather with friends later this year to celebrate that gift.

Her ashes will rest next to Jack's in the McGillivray Cemetery, close to the home on Paudash Lake they shared for many happy years.