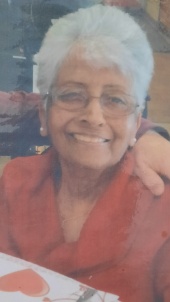 It is with great sadness that the family of Angela Doyle (née da Costa) announce her passing on July 18, 2021 at the age of 79.

Angela will be lovingly remembered by her husband of 47 years, Kevin; daughter Larissa (Tim); granddaughter Ada; brother Bernard (Jacinthe), and numerous other family members and friends.

Angela was predeceased by her parents, Joao and Pilarina; and sisters, Ella and Aurea.

Angela came to Canada as a refugee from Uganda in 1972, met Kevin shortly after, and they married in 1974. They soon after got actively involved in welcoming other refugees to Canada and helping them get established here.

Angela worked on Parliament Hill in Ottawa, giving up that role after several years to work as a mother instead.

Angela was a devoted wife, mother, grandmother, daughter, and sister. She was also a very accomplished seamstress, cook, and baker.

For many years she courageously battled the debilitating effects of Lupus, and in her later years, Alzheimer’s. Through all this she looked after her family.

In view of current Covid restrictions, funeral services will be held virtually.

Memorial donations may be made to the Lupus and Alzheimer’s societies of Canada.

We are saddened to hear of Aunty Angela's passing. I remember how she created her cakes with such creativity, I had never seen anything like that, and her marzipan was the most delicious I have ever had. So many great memories, from taking the bus to Bayshore to picnics to sleepovers to board games.

Aunty Angela, throughout the time I have known you, never once did I see your complain about the pain, you always had a smile for us. I pray now that your pain has gone and that you are resting in God's presence. Uncle Kevin and Larissa, thank you for sharing her with us. Our prayers that our Heavenly Father will comfort you during your time of sorrow and that we will all be together one day.

With much love, Karen, Matthew, Isabella, Nicholas, Gabrielle and Amelia