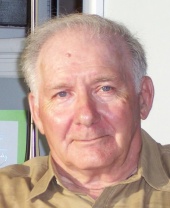 He graduated from Elgin Rural High School in 1955 and attended Teacher’s College in Fredericton, NB. His first teaching position was in Tabusintac, NB, 1956-58, where Edith Joy Beattie was one of his Grade 12 grade students. They were married on July 3, 1959, and settled in Boom Road, NB. Aubrey taught English and history at North and South Esk Regional High School from 1959 to 1973, and served as principal also. He took summer classes at the University of New Brunswick to earn a Bachelor of Arts.

In 1973, Aubrey and Joy moved to Wakefield, Quebec, where they became the administrators of Brookdale Farm, a Christian children’s home. Always a country man at heart, Aubrey enjoyed running the dairy farm as well as caring for the children.

When Brookdale closed in 1975, Aubrey became a Special Education teacher of the Ottawa-Carleton Separate School Board, working at Frank Ryan Intermediate School and then St. Paul High School. Special Education was a new field at the time, but Aubrey’s previous teaching experience and his patience stood him in good stead. Through summer and night classes at the University of Ottawa, he completed his Bachelor and Master of Education and Special Education Certification. Aubrey retired from teaching in 1993.

Aubrey was a founding member of the Ottawa Reformed Presbyterian Church, and served as an elder for decades until his health declined due to Parkinson’s Disease. He was a member of the Board for Ottawa Theological Hall (OTH), and enjoyed working in the OTH library.

Aubrey is also mourned by his brother Barton (Barbara) Ayer, his sisters, Laura (late Vernon) Lewis and Arlene (late Bill) Mercer, and many nieces and nephews.

Due to COVID-19 restrictions, the graveside service and burial will be limited to the family.

A memorial service will be held at Ottawa Reformed Presbyterian Church, 466 Woodland Avenue, Ottawa, on Saturday, August 29th, at 13:00. COVID-19 considerations require that attendance be limited, with mandatory pre-registration. The service will also be live-streamed at

In lieu of flowers, donations to Parkinson Canada (parkinson.ca), or Ottawa Theological Hall (OTH) are requested. Donations for OTH may be done by e-transfer to ORPC with “OTH in memory of Aubrey Ayer” in the memo line. Email address is treasurer@rpcottawa.org

Cheques with “OTH in memory of Aubrey Ayer” in the memo line may be mailed to the church address,

So sorry for your loss! Love and Prayers!

The family of the late Aubrey Eugene Ayer

My sincere condolences to Aubrey's family. I attended NSER and graduated in 1969. When I was in grade 8 Mr Aubrey Ayer was my teacher.

My deepest condolences to all the Famiy. Aubrey was a wonderful man, Teacher & Principal & Father. I also knew him through St Stephens Presbyterian Church, Sunny Corner NB.

My sincere condolences on your loss. Mr. Ayer was principal of NSER while I was a student. I found him to be a kind and fair man.

It saddens our hearts to hear of the passing of our father. No words can express how
sorry we are. We didn't know your father but from what we have read he must have
been a great person. And that reflects on how he raised his family.

A kind and loving man who shared his gifts and talents to everyone he met.
His deep faith was lived out in his everyday life and he touched the lives of many including his church family in Almonte. He will be missed and always remembered with fondness and love.
Marjorie Bryan

Our heartfelt sympathies to you and the whole family during this time of loss. Your Dad had quite the career and service to the Lord. May all of you be comforted by the fact that he is with his Saviour.

"I am the resurrection and the life."

Jacques and I are so sorry for your loss of a wonderful husband, father, grandfather and great grandfather. During the 70's Joy and Aubrey were amongst our very best friends. We spent so many evenings together just chatting and they were such a great influence upon us as we were that much younger that we looked upon them as not only friends but mentors. We enjoyed so many great meals and conversations about spiritual things that our lives were very enriched. At the time of that terrible fire at Brookdale Farm we spent many hours together and the bond of friendship grew even stronger. These latter years we have not been in touch as much but the memories of those earlier years are very strong and so we mourn alongside you all at the loss of this quiet but great man. May our Lord comfort your hearts and minds at this time. Absent from the body and present with the Lord! Praise His Name. Joy I wish so much I could give you a hug but just know that you are in my heart and prayers at this time. Aubrey was such a quiet and calming influence but always loved the Lord and led his family so well. He will be missed by so many.
Love and prayers
Phyllis and Jacques

Our condolences to you and your family on your loss. Aubrey was a wonderful and kind man. He will be missed by all he touched.

We just learned of Aubrey's death this past week and wish to extend our sincere sympathy and prayers. Bill and I taught with Aubrey when St. Paul High School opened in 1978 and we remember him as a kind, quiet, gentle soul who was an excellent role model to the special education students he served.