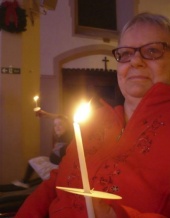 Her hair freshly cut and coiffed; her teeth polished and "whiskers & brows" plucked before her daughter said "goodbye, see you later, I love you" on Monday. His table must have been set, as Tuesday, Carol received the invitation to join loved ones already departed, and bid this earth "adios" the morning of December 10, 2019. It is with tremendous sadness, that her daughter Jodi Brown, "son" Anthony Carter, and cherished grandsons Marcus & Isaiah, announce the death of their beloved Mom and "Oma".

Carol is sure to be planning the Christmas feast & her 78th birthday festivities, where she will be surrounded by her parents Leo & Agnes Buhlman, siblings Jack & wife Marg, Rita & husband Vinnie, Elaine and Bernie; special cousin Sheila; beloved mother-in law Beatrice; and Jodi's Dad, Robert ("Bob") Brown. The tomato aspic, pints and sangria will be plentiful as they tickle the ivories and play the banjo & spoons!

She leaves behind sisters-in-law Joan Buhlman and "Auntie Jo-Jo" (Drew Gillies) and will be missed by many other family members and friends too plentiful to name, but especially by her cherished friend Pam Meunier ("Lucy"), who has lost her "Ethel".

In Windsor, Carol was an employee and retiree of Chrysler Canada; an active parishioner for decades at Our Lady of the Atonement; an avid Pistons, Red Wings and Tigers fan. In retirement, prior to the onset of Alzheimer's in 2011, she travelled the world, learned Spanish, and was a dedicated volunteer for the AIDS Committee of Windsor, the Windsor Regional Hospital, Habitat for Humanity, Project Rachel, and the Catholic Women's League of Canada. She was easily recognised throughout the neighbourhood by her power walk, wave and grin! But most of all, she was a proud Mom and Oma.

Jodi, Anthony, Marcus & Isaiah spent nearly a decade caring and advocating for Carol in Ottawa. This journey would not have been possible without the unending love and support of so many friends, family, co-workers, neighbours and the St. Joseph's community. We extend a special thanks to all of the staff and friends of Gary J. Armstrong. Unending gratitude is also expressed to special caregivers Joanne and Sandra, who so lovingly dedicated their time to caring for Oma and providing respite to the family; and to Colleen, Karen, Nat & John, Rosanne, Sherri, Suzy, their families and so many others who have been pillars of strength for Jodi.

In her final act of benevolence, while Carol's spirit will live on in the many lives she touched, her body has been donated to the University of Toronto Medical School in support of Alzheimer's and breast cancer research.

The family invites those of all beliefs and all ages, to a joy-filled celebration of Carol's life to take place Saturday, December 21, 2019 at 10:30 am at St. Joseph's Parish, 151 Laurier Ave. E., (Ottawa) with condolences being received by the family beginning at 10am. This will be followed by a meal together in gratitude for your circle of strength, where all are invited to share favourite memories of Carol.

In lieu of flowers, donations in Carol's memory can be made to the Dementia Society of Ottawa or Habitat for Humanity Canada. Non-perishables for the St. Joseph's Supper Table and toiletries, hand warmers, socks and toques for the Women's Centre will also be collected at the church on December 21 where several of Carol's colourful purses will be filled with essentials for women in need.

"To care for those who once cared for us is one of the highest honours." (Tia Walker).