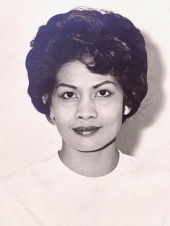 Born in the Philippines on March 8, 1928, Cleo Ficht (born as Maria Cleofas Liwanag Sangil) led a life which spanned four continents. Married initially to engineer Paulo J. Natividad (also Filipino), she followed him to foreign destinations where he worked – Okinawa, Japan; Tehran, Iran; Athens, Greece – then, immigrated with him to Ottawa, Canada, where she passed away on April 13, 2020.

During their years of marriage, she was primarily a homemaker who bore four children – three daughters and one son – for whom she created a home and raised in these different countries. She had an ear for languages, and managed to learn colloquial level Farsi and Greek, which enabled her to get around. Energetic, charming and strong-willed, she had a zest for life, so she connected easily with all kinds of people. She was an attractive woman, well-groomed and impeccably dressed, who always looked younger than peers in her age group. With cigarette in hand, in heels and decked out, she navigated Tehran’s bazaar, followed by four children and a driver while she negotiated in broken Farsi a rug or some household item. During the ‘60’s in Tehran, the merchants, who followed her around, probably thought she came from Mars.

Finally settled in Canada in 1970 with children mostly grown, she found a second life as an entrepreneur. She opened two beauty salons and with sheer determination and plenty of charm, she drew many clients to this new phase of her life. She enjoyed the give-and-take with her customers, the independence of having her own income, and being a business woman. Eventually, she closed both salons in Ottawa. After her first marriage ended, she moved to Lac Tranquil in Denholm, Quebec with her second husband Ross Ficht. She opened a small salon adjacent to her residence and subjected her children and grandchildren to never-ending haircut rituals.

At Lac Tranquil she found a quieter country life, discovered gardening, and new-found friends in nearby cottages. She shed her heels and fancy clothes, but not the cigarettes which she smoked on the dock watching the seasons go by.

When her second husband died, she returned to Ottawa, living independently before moving to a nursing home where she passed away peacefully. She leaves behind her children, their spouses and her grandchildren.