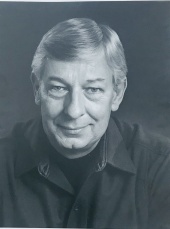 Edgar began his career as a broadcast radio professional across New England and the American mid-West. He spent a challenging time as a war correspondent for the ABC Network in Vietnam. After immigrating to Canada in the 70s, he worked at various radio and television stations in Ottawa and Toronto and was rewarded with The ACTRA Best Talk Show ‘Nellie’ 3 years in a row. He never forgot his roots but became a Canadian citizen.

He leaves his devoted wife Louise {Lapointe}, his beloved stepdaughter Danièle (Robert McBride), many step-nieces and nephews, a niece Tracey and nephew Robert Walsh in Boston Massachusetts and several cousins throughout the USA.

A Celebration of Life will be arranged at a later date in Notre Dame de la Salette, Quebec, where he will rest in the family plot near the tranquil cottage he loved.