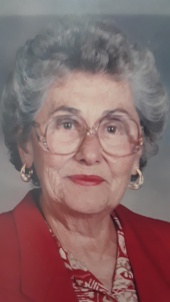 Born in an ethnic German community in Romania in 1923, Frances passed away on November 2 in Ottawa. She served with the German Red Cross as a nurse in World War II in Russia and Yugoslavia, where she met and married husband Siegmund in 1944. They were refugees in Germany from 1945 until 1953, when they immigrated to Canada with two young children, two suitcases and barely a word of English between them.

They worked hard in Toronto, learned English and prospered. Frances worked at Ontario Hydro in the 1960s and eventually they moved to Minden Ontario. Widowed in 1988, she moved to Ottawa in 2004, where she enjoyed life in her elegant apartment and became an expert at navigating OCTranspo. Ottawa was her oyster! Her family remembers with great fondness the wonderful meals and delicious baking that came from her kitchen. In 2016 she moved to Unitarian House.

Frances was predeceased by her husband, parents and little sister Anna. She is remembered with great love by her son, Edgar (Julie) and grandsons Gregory (Charlene) and Jeffrey (Carmelle) and by her daughter Karin (Peter) and granddaughters Fiona Simmins (Simon) and Jessica Simmins (Mark). She was the proud great grandmother of Graham and Alexander, and was delighted to learn of another great grandchild expected in the spring of 2021.

Her family wishes to thank Dr Martha Holt, Dr Walter Potoczny and the staff of Unitarian House for their very compassionate and kind care of Frances in the past 4 years.  Funeral arrangements entrusted to the Funeral Co-operatice of Ottawa.  www.fco-cfo.coop 613-288-2689

The family of Franziska (Franzie) Weiss,

Karin;
I want to express my deep condolences. I came to know your mother via mine almost ten years ago. I will always be grateful to her for being a good friend and a good listener to my mother when she lived at Billings Lodge opposite your mother's elegant apartment.
The two of them shared a common heritage.
I promised that I would keep in touch with Franzie after my mother died and I did, maybe not enough times. I visited her a number of times in her retirement home. The last time was in early July this year. We have a mulberry tree in our back yard and I brought her a small number of sweet mulberries and raspberrries that I had harvested . I remembered that she and my mother had often reminisced about eating mulberries when they were young girls. She would tell me that they had both a white and black mulberry tree at their home in Johannisfeld.
I did not know the protocol at her retirement home last July. I expected that that I would simply drop off my gift at the front desk. I was pleasantly surprised when I arrived that she was sitting outside. We had a twenty minute visit. At first she did not recognize me because of the mask. When she finally did she was so apologetic. I told her not to worry about it. I thought many times about visiting in September but the time went by and unfortunately I did not. I feel sad about that.
She only once told me about leaving home and going east to the Sea of Azov and becoming a nurse. It was to to me a fanscinating story. I kept asking her to tell me more but somehow she never did. Why would she not go west to Vienna to a place where she at least knew the language? I never received an answer.
I loved talking to her. Her intelligence always showed through. She had broad interests.
I shall always be grateful to her and I will miss her, but happy that I did get to know her.

I am sorry to hear of your mom's passing. Though my visits were few and brief, I felt she welcomed me with grace and respect. My condolences to you, Fiona, and Jessica.