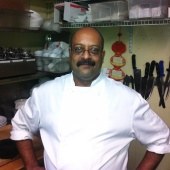 Gervais passed away at the age of 55 at St Vincent Hospital, Ottawa, 11 months after being diagnosed with brain cancer.

He was born in Karachi, Pakistan to John and Lena Goveas. He was the second youngest of 7 children. He spent his early years in Manama, Bahrain. He and his family moved to Canada in 1973, when he was 6 years old.

Gervais lived in many places in Canada throughout his life, including Ottawa, Montreal and Calgary, but he called Toronto his home and the Habs his home team.

He made frequent trips to visit family members. Despite living away from them and sometimes being in infrequent contact, he always succeeded in matching the perfect gift to each family member, demonstrating an attentiveness to each person that few people have. Those gifts were often books, especially to his nieces and nephews, because he was a voracious reader of fiction and non-fiction, and he knew how to select which books would best match their interest or curiosity. He also had a knack for casually saying out loud what others were thinking, contributing irreverence and laughter to family get-togethers.

He worked in restaurants as a cook, chef and kitchen manager until the age of 50, when he left the industry to study Architectural Sciences and pursue his other passion of creating structures. Sharing a love of good food and interesting places would always remain important to him.

He dreamed of travelling the world and spent time in India and England when he was younger. He also spent a few months journeying through Morocco and Europe before the pandemic cut his trip short. He fell in love with Morocco and smiled every time he talked about it, especially the camel ride. He was a big believer in seeing the world by walking through it. And he walked everywhere he could. He took great pleasure in seeing the details and experiencing the moments that others miss.

Predeceased by his father, John, Gervais is survived by his mother, Lena. He leaves behind his six siblings: Marcia Ransom Marinier (Claude), Janice, Jonathan, Jason (Leanne Holt), Leonard, and Lyndon (Lynda Manser). He will be remembered as the loving uncle of his two nieces: Elisabeth Henderson (Kelvin) and Sarita Servatius; and his five nephews: Phil Marinier (Tiyanan Sutthinon), Jarryd Servatius (Emma Downie), Arun Servatius, Ioyan Manser-Goveas, and Jasper Goveas. He was also the proud great uncle to James and Levi Henderson.

Donations in memory of Gervais may be made to the Bruyère Hospital https://www.bruyere.org/en/bruyere-foundation

Though Gervais is no longer with us, there is nothing that can take him from your memory and the things you shared with him. Nothing will ever replace the space in your heart that Gervais occupied. If you keep that space filled with his memory and your experiences together, he will always be there with you.

We have no words that will make you feel any better because we know that this is an incredibly difficult time for you and your family. Plus, words don’t do justice to how we feel for you right now, as you bear the burden of his passing. I am thinking of you and the family, praying that the Lord brings all of you strength, peace, courage and comfort at heart, through these difficult times.

I have some fond memories of Gervais at age 3 when he visited us in Montreal with Leonard and your parents from Bahrain.  The second time I got to meet the whole family (except you) was in 1973 when they migrated to Canada and stayed with us for about a month before Lyndon's birth. I used to watch Gervais and Darryl play together and they were such happy kids.  Since they were close in age, Darryl always looked forward to visiting his young cousins. Once they moved to the Osgoode, distance made the visits more infrequent. It was nice to see him again with some of your family at Sharlene's wedding in October 2014 and then a couple of months later at Uncle Tony's funeral.
My thoughts and prayers are with you all as you cope with the loss of Gervais. Please accept my deepest sympathies again and extend my condolences to your mum Lena, Janice, Jonathan, Jason, Leonard, Lyndon and the rest of the family.

May Gervais' soul Rest In Peace. I will be attending the mass I offered for the response of his soul at St. Augustine's parish, Ottawa, at 8:30 AM on Wednesday, September 21, 2022.

With you in sorrow,

Thank you for the numerous personal messages and emails received.
You words of sympathy are heartfelt.