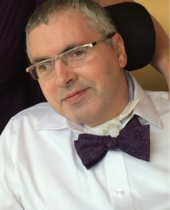 Guy Farley, son of the late Fernand and Jeanne Farley, passed away on Saturday, October 19, 2019 surrounded by his family. He will be lovingly remembered by his wife of 32 years, Suzanne; his sons, Paul (Arianna) and Jean; his grandson Matteo; and his lifelong friend Pierre Pilloud (Julie). He is also survived by his brothers, Jacques (Phyllis) and Gilles (Suzanne).

Despite living with Multiple Sclerosis for 37 years, Guy travelled the world, seeing Australia, France, Germany, England, and the United States.

A professional engineer, he enjoyed a career as a defence scientist.

He will be remembered for his faith in God, his kind spirit, and his love for his family.

Special thanks to the care providers at Saint Vincent Hospital.

Memorial Service on Sunday, October 27 from 1:30pm to 3:30pm at The Metropolitan Bible Church, 2176 Prince of Wales Drive, Nepean.

In lieu of flowers, a donation in Guy's memory can be made to the Multiple Sclerosis Society of Canada.