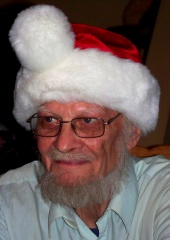 James William (Bill) Coles passed away peacefully on January 8, 2022 in Nepean Ontario, at the age of 90.

By his side in his last days were his son Jim (Barbara Sauvé), his daughters Susan, Deborah (Luc Gosselin) and Catherine, and his grandson Matthew Coles, who will greatly miss their dad/granddad. He is also survived by his granddaughter Erika Cao (nee Sauvé), nieces Carolyn Kavanagh (nee Mitton), Elizabeth Hawkins (nee Mullin) and nephews Bruce Mitton and David Mullin. He is also remembered by his wife (divorced) Cecily Courtney (nee Kennedy).

Bill enjoyed his career as an air traffic controller and had a love of planes throughout his life that he shared with his son Jim. He was an avid reader of many genres, with a special interest in Canadian history, and crossword solver to the end. In his younger years, he also enjoyed a broad range of music (an interest he passed on to his grandson Matthew), and practiced and taught archery.

His children would like to thank the compassionate staff and caregivers at Starwood Extendicare for caring so well for him in his last years.

At his request there will be no public memorial. If you would like to honour Bill with a donation, please consider The Dementia Society of Ottawa and Renfrew County.