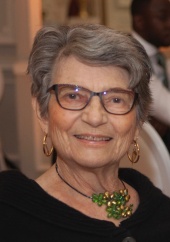 Marilyn died peacefully on her terms at home in Ottawa, the same city where she was born. She grew up in North Gower, now part of the City of Ottawa, with early memories that included World War II rationing.

Marilyn was a 1955 graduate of South Carleton High School in Richmond and a 1959 Bachelor’s degree graduate of the Macdonald Institute, a predecessor college of the University of Guelph. Her Mac’59 classmates were always very special to Marilyn, who was able to participate in two events in 2019 to celebrate the 60th anniversary of their graduation.

Following her university graduation in 1959, Marilyn started a career in teaching Home Economics at the high school level in Ontario, originally in Prescott, with one year in Niagara Falls, but mostly in the old Ottawa Board of Education. Although her teaching career ended in 1987, she was active in the Ottawa Home Economics Association again in the 2004 to 2017 time frame.

As a result of Maury’s first career with BNR and Nortel, he and Marilyn lived in Durham, North Carolina 1987-2000 and the Paris, France region 2000-2003, where they shared many wonderful travel and cultural experiences. They returned to Ottawa in the fall of 2003 and soon became members of the First Unitarian Congregation of Ottawa.

Wherever she lived, Marilyn’s grace, warmth, and caring nature won her many friends. She always made good use of her strong home management skills and was active as a volunteer. Her good grace continued as health issues, some longstanding, got more serious in recent years. Marilyn was a cancer survivor going back to 1979. She was very grateful, as was her family, for the good care she received from the health care system and others through the years and during her final illness.

A celebration of Marilyn’s life will take place on Saturday, January 11th, 2020 at the First Unitarian Congregation of Ottawa, 30 Cleary Ave, with visitation at 1:00pm, the service at 2:00pm, and a reception to follow. In lieu of flowers, please consider donations to the Multifaith Housing Initiative or a charity of your choice.

Our family has wonderful memories of Marilyn and our times together in Durham. She was a very sweet and caring person.
We especially enjoyed the hospitality of Marilyn and Maury during our visit to Paris in 2003.
She will be missed. May she find peace in heaven.
Clay and Kay Swenson

Our sincere condolences to you, and to your & Marilyn's extended family. We are glad for the experiences we shared over many years here, in North Carolina, France and Spain.

Ken and I have wonderful memories of a 2003 circle road trip together through France and Spain, of being met by you and Marilyn on arrival in Paris, of visiting Monet's home and garden in sunny April, and of exploring Versailles, where you lived, and Paris. A 10 day circle road trip together followed, via the Loire valley to Spain highlighted by the Frank Gehry-designed Guggenheim Modern Art Museum in Bilbao, the elevated city of Toledo, enjoying art treasures and Spanish tapas in Madrid, and a high-level picnic at a Pyranees-mountain crossing back into France. Marilyn had researched our overnight stops, opting for unique inns and dining experiences which we remember fondly. We savored the regional food and wines, as well as the arts and architecture enroute. Marilyn's travel scrapbook was a delight to explore...
In memory of Marilyn, we are pleased to support the Multi-Faith Housing Initiative, whose latest project will provide housing for veterans with PTSD.

Dear Maury, Peter and I wish to offer our sincerest condolences on the passing of your lovely wife, Marilyn. We hope that your times spent with family, but most particularly your times spent as a couple at the sanctuary that is your cottage, and which no doubt brought countless moments of joy and serenity, will sustain you now. Kelly and Peter Morrison

We've had the pleasure of knowing Marilyn for a number of years at our cottage community. It was always so very nice to spend time with her and to hear of her adventures. Afternoons of playing crokinole at the cottage revealed her competitive spirit and good aim! We are so very, very glad our paths crossed. Know that she will be remembered fondly; take joy in the memories.
With warmth and love,
Monica & Jim

Our hearts go out to you. Peggy and I are so glad we had the chance to visit Marilyn a few short weeks ago.

As we reflect on skiing, the loppette, and our kids growing up next door to you at Edelweiss, the fond memories come flooding back.

You are in our thoughts.

Maury, I can't put into words how very sad I'm feeling now. Marilyn was true blue. She was indeed a good friend, always there for you. I loved her dearly and I will miss her forever. I'm thinking of you now and I know how much you loved her. May God keep you in His care.
Love, Sara

Maury, Beth and Andrew and family

So sorry for your loss. My condolences..

I would like to offer our sincere condolences during this difficult time.

We are sorry to hear of Marilyn's passing. She was a wonderful lady.
You are in our thoughts and prayers.
Hugs,
Becky & Scott

We were so saddened to lose Marilyn. As beginning teachers together at South Grenville High School in Prescott in 1958 we both had happy years working on the field of education. After a number of years we were delighted to find Marilyn joining us at First Unitarian, where she and Maury became so very involved in the work of the Congregation. We will really miss Marilyn, but will still value your friendship.

We will miss Marilyn in the Whitewater Village community very much. Sending love to you in this time of sadness.

I'm saddened to hear the news, Maury, and thinking of you.
Don McDiarmid
UU Fellowship

I still remember well Marilyn's caring attitude and hospitality when I stayed with you during the CUC-AGM held in Ottawa. She was a master of detail.

Dear Maury,
We got such sad news from Charlotte and would like to express condolences from the bottom of our hearts.
Back to our time in Durham, we remember Marilyn's hospitality and kindness, delicious dinners made for us in your wonderful warm house.
She was so special, intelligent, strong person: will be remembered always....

Dear Maury,
I am so sorry to learn that Marilyn has passed away. I remember her well. Even though her image is a little vague in my mind I can certainly 'see' you both together as a couple. I recall recognizing you both in the audience at several English Theatre productions at the NAC. I know too that together you participated in several FET trips. If memory serve me well, you enjoyed some of day trips to Montreal, the overnight trips to Stratford (maybe Shaw too) and I think you also joined one of the trips to London. I am saddened that you both endured her illness for so long. It must have been very hard for you and now even more so that she is no longer with you. Please accept my very sincere condolences.

On a different note, I hope your interest in live theatre has not waned and that soon you will feel like rejoining some of the FET trips. Trips coming up in May, July, and September were announced today. It will be a pleasure to see you again. I look forward to it.