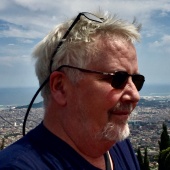 Mark passed away in his 67 th year in the early morning of October 21, 2019, with two of his three sisters at his side, ten years after receiving a diagnosis of aggressive prostate cancer. He was a survivor with an optimistic outlook that carried him through most of the difficult moments of his illness. A creative craftsman who left a legacy of finely conceived projects for discriminating clients, he also built television and film sets and even dog sleds. In his early years, he delighted his friends with wildly inventive mail-art projects that Canada Post obligingly delivered. Mark was fascinated with how things worked and never saw a machine he didn’t love, but he was also a loyal friend and a storyteller who loved to hold his audience captive with colourful anecdotes. He had a beautiful voice and, although not religious, sang at one time in an evangelical church barbershop quartet, telling his fellow musicians, “The church has the best music.” Predeceased by his parents, Marion Wilson (née Conroy) and William (Bill) Wilson, his older brother Christopher Wilson and his nephew Mark Wilson; tenderly missed by his dear friend Patti Prest, his sisters Diana Nemiroff, Frederica Wilson, and Alexandra Wilson and her husband Paul-André Baril, as well as his sister-in-law Deborah Wolfe, nieces Samantha Nemiroff and Laurel Moyse and nephews Noah Nemiroff, Samuel Wilson and Frédéric Baril. A celebration of Mark’s life will be held on Friday, November 8th at 4 pm at 20 The Driveway, Ottawa Ontario. If desired, donations may be directed to the Bruyère Foundation.

Reading about Mark’s life made us realize what a wonderful and interesting person he was, and how much you will miss him. Our hearts go out with you, your family, and Mark’s friends in these difficult moments.

Our most sincere condolences,

I'm so sorry to hear of your loss, and our loss. He was a charming, kind man. May we meet again someday.

He was a genius and an artist. May he rest in peace. From his landlord in Toronto Lino and Fatima Vieira. We will miss him.