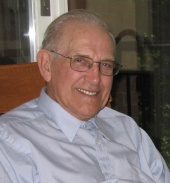 Reginald Kettle died peacefully on Saturday October 24th, 2020 at the age of 97.  Reginald, the son of the late Herbert Charles Kettle and Hannah Paget of Derby, England is survived by his spouse of 72 years, Norah. He is lovingly remembered by his children Robert, Richard and Elizabeth (Stephen). His granddaughter Sophia will always remember her Granddad’s love of music and his original sense of humour. Reg was born in Derby, England, the seventh of nine children. He grew up close to the Rolls Royce factory where he and his brothers began working as young apprentices.  Aside from his conscription to the Royal Air Force at Cranwell, Lincolnshire for two years, Reg worked in the Rolls Royce experimental department for 25 years. It was at Cranwell, where he met his future wife Norah. He and his wife and two sons Robert and Richard emigrated to Canada in 1963. Two years later Elizabeth was born, the first and only Kettle to be born in Canada. Reg was always known as a very hard worker and a creative problem solver, working another 25 years at General Foods in Cobourg before retiring in 1988.  Reg made many journeys across the ocean, connecting with extended family in England, travelling the world by plane and ship and making their annual migration to their winter home in Bradenton, Florida. He spent lots of quality time outdoors, going on many fishing and hunting excursions and enjoyed looking out over Pigeon Lake through his Ennismore cottage window. His strong and resonant baritone voice was an important part of the choirs he performed with throughout his life. Norah and Reg moved to Wellington on the Lake in 2006 where they spent many happy years making new friends and enjoying the beauty of Prince Edward County. He was a regular at theWellington Legion Friday dinners.  He will join his sisters Doris, Mary and Betty and his brothers Bert, Syd, Harry, Ernie and Harold at Mark Eaton Memorial Park in Derby, England. A private celebration of life for immediate family and close friends, conducted by the Rev. Joyce Blackburn, will be held on Wednesday November 4th at St. Andrew’s Anglican Church, 244 Wellington Main St, Wellington, Ontario.  In lieu of flowers, memorial donations may be made to the charity of your choice.  Funeral arrangements entrusted to the Funeral Co-operative of Ottawa. www.fco-cfo.coop 613-288-2689.

My thoughts and sincere condolences to the family of Reg Kettle. I was fortunate to know Reg through my visits with him when he resided at Elder Care in Bloomfield. I admired his positive attitude and considered him a valued friend.