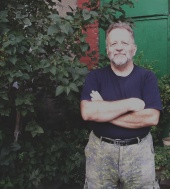 Born in Kapuskasing on February 20, 1953, Robert was the oldest of four children. It was in Kapuskasing that Robert began his life as a construction worker at the age of 15. He then moved to Ottawa, Alberta, British Columbia and Northern Quebec before returning to Ottawa permanently.

From the time he started as an apprentice mason, Robert never strayed from his path as a construction worker. He loved his job and was not afraid of hard work. From a simple worker to a site superintendent and independent contractor, his career spanned a period of 45 years. He was intellectually curious and had remarkable expertise in materials and construction techniques. He held a CCDA Red Seal and a Canadian Construction Association Gold Seal.

He was struck down by Alzheimer's disease.

A private memorial service will be held at the  Funeral  Co-operative of Ottawa on Saturday, December 4, 2021. In accordance with current COVID protocols, guests must be double vaccinated; proof of vaccination will be required at the door and masks must be worn.

Robert was loved by us Christians in the church on Ottawa.
When I came to meet I also was new to Canada still. Robert invited me one Lords Day after the meeting to worship the Lord to his family for dinner. I met his parents and aunt there then. It was very precious.
To have him around was ever dear and His helpfulness and kindness unprecedented. We miss him.
Wishing you to be comforted that Robert has entered into the joy of the Lord for ever and that you all will join him again in the day of the Lord’s visitation. He is near us, in our hearts and mouths, the Lord Jesus Christ.

What can I say, I am so sorry for your loss. Robert was a character...we all remember him well. Roxanne, Alex and I cannot make the funeral but we are there with you, thinking about you and loving you.

Hang in there and hang on to each other. I will hug you when next I see you.

Dear Marie and Paul,
May the Father of compassions and God of all comfort comfort you during this difficult time. May you be comforted as we are that Robert is now in the paradise awaiting for resurrection and we shall all see him again in resurrection.

Our deepest sympathy,
Hannah
Member of the Church in Ottawa

My deepest condolences to Robert's family with much love and many blessings. I am a sister from the Church in Ottawa. I knew Robert since 1992. He loved the Lord Jesus and the scriptures in the Bible and now he is resting in the Paradise of God.
Much grace to all.
Marie