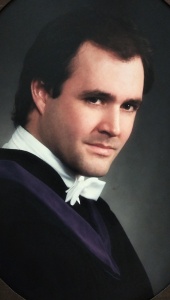 It is with great pain and heavy hearts that we announce the sudden passing of Steven Charles Dollar on Thursday, June 3rd, 2019 at the age of 58, in Hawkesbury, Ontario.

Originally born in Sault Saint-Marie, Ontario, and having grown up in Oshawa and Waterloo, Ontario, Steven graduated from Windsor Law School. He went on to enjoy a successful practice, having worked as Military Defense Council and Attorney for the Judge Advocate General’s Office in Canada and abroad. He then began working as Federal Crown Council at the Canada Revenue Agency in Ottawa, and then with the Public Prosecution Service of Canada, in Kitchener, Ontario.

Though his career was an important and meaningful part of his life, Steven’s son, Geoffrey was evidently the centre of his world. As such, Steven purchased his final home in Hawkesbury to be closer to Geoffrey. He wanted to watch his son blossom into a successful performing artist whom he has actively supported and from whom he has derived great pride. His most recent, and final home sits on the Ottawa river, where Steven enjoyed many peaceful moments, during which he has found serenity, solace, and comfort.

Steven is survived by his son, Geoffrey Michaël Dollar, his former spouse, Johanne Richer, and will be greatly mourned by his parents, Gordon and Marilyn Dollar, his two brothers and their wives, Alan & Mary, Stewart & Yin as well as by his niece and nephews, Julia, Sean, and Justin. The extended Dollar family, located primarily in Southern Ontario, will equally cherish the memories they share with Steven, and mourn his loss.

He will be remembered for his kindness, his generosity, as well as for his distinct sense of humor and personality.

A visitation from 10 am to 11:30 am followed by the Funeral service will be held on Saturday, July 6th, 2019 at Shawn Jackson Funeral Home at 31 Elgin Street, St. Thomas, Ontario, with a reception to follow the service.

Steven will be laid to rest in the St-Thomas Cemetery in St-Thomas, Ontario.

In lieu of flowers, memorial donations may be made online to Propeller Dance, an organization that he has at heart: https://www.canadahelps.org/en/charities/propeller-dance/

Geoffry, his mother, and family members.

Words however kind can't mend your heartache, but those who care and share your loss with you, comfort and peace of mind.
May you find strength in the love of family, and in the warm embrace of friends.

Steve spent a lot if time with Frank and I when he attended University here in Windsor. He taught our son Richard how to crash hotwheels and he insisted that our daughter should be named Theresa Steve. He let me try and ride his motorcycle one time. I've never seen someone run so fast when I laid the bike down just about 300 ft down the street. Geoffrey, he talked about you often. He loved you so much. I will miss my handsome cousin.

May this message bring you the testimony of a profound and sincere sympathy.

I worked with Steve at the office of the Federal Crown.

He was a dedicated Crown Counsel and fine person.

Most of all, however, I will remember his love for and pride in his son, Geoffrey.

May Steve rest peacefully and may his family be comforted by the memories of his goodness.

I am so sorry to hear of your loss. I have many fond childhood memories of Steven. The one that most comes to mind right now was that of 50 years ago this month when Steven, his parents and brothers drove out to visit us in southern California. The three Dollar brothers, my sister, Robin, and I were out in the backyard playing in the still daylight early evening when our parents called for us all to come in the house right away to watch the television. We all stood there in front of the large console and watched a man walk on the moon for the very first time. I remember looking over to my left at Steven, his almost black/brown eyes were as wide as saucers. We all watched it for awhile, then ran back outside to resume playing. It wasn't long after that I remember another window being broken......the boys had brought their lacrosse sticks from home and were showing me how to play. Steven was always so kind to my sister and I during our visits and also very fun to be with. I will miss him dearly. Love, your cousin, Ann Louise