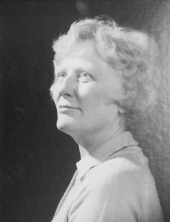 It is with heavy hearts we announced the passing of Eleanor JOAN Adele Kemp Smiley peacefully at Greystone Village on Saturday, April 24th, 2021 in her 97th year.

Eleanor Joan Adele Kemp was born in Ottawa, on November 13, 1924 to Jessie (nee Cantrall) and John (Jack) Kemp. She spent most of her early years in Ottawa, with the exception of a memorable period in Gogama, in northern Ontario, during the Depression.

Joan was a devoted wife to the late Donald Smiley, loving Mother to David (Ellen Allen), Linda (the late Sebastien Ieria) and Donna, and adoring grandmother to Shannon Ieria (Dean Isaacs) and Eric Smiley. Great grandmother to Sloan and Quinn.

For Joan, summers in the 1960’s, meant piling her children into the family station wagon and driving to the East Coast to camp. A favourite spot was Cavendish National Park on Prince Edward Island. She loved to travel - visiting Bermuda, England, Scotland, Mexico, Costa Rica, Cuba, Montserrat, Dominican Republic and cruising to Alaska and Spain.

In later years, the cottage and boathouse (affectionately know as ’The Kamp’) built by her father on Round Lake, expanded as the family grew and became the centre of summers for her and her family.

Joan was passionately involved with St. Martin’s Church for decades. She was a member of Beta Sigma Phi for 71 years, serving as Chapter President and on the City Council. When she moved into her condo, of course, she joined the Social Committee, Canasta Card Group and welcomed new neighbours with a jar of her famous ‘Peach & Cantaloupe Marmalade.’ In recent years she enjoyed volunteering with the local Grad Group of the CNIB, relishing her duties as Calling Captain.

Her generosity of spirit and kindness will be truly missed by her family, friends and neighbours. And her cats, Mimi and Winnie.

We would like to thank the staff at Bruyere’s Greystone Village for their excellent care, kindness and compassion.

A celebration of Joan's life will happen when conditions permit. For those wishing, donations may be made to the Canadian Institute for the Blind Foundation or charity of your choice.

I send you all my love and comfort. What a beautiful picture you chose of her. I will never forget my Aunt Joan taking Donna and I as young teens to Cavendish Beach camping for a month! That took chutzpah! I will remember my Aunt Joan as an independent and caring woman with spirit. Take care

We share in your sorrow and will miss her very much. We loved to spend time with your family at home and Kamp. Lots of Love from Bill and Brenda, Chris Kemp(Tracy), Isabel Kemp.

So sorry to hear about the passing of your Mom

We've always been very fond of Joan. She had such a wealth of knowledge. With always a kind word. We will miss seeing her up at Round Lake... And in Ottawa of course. Sending hugs.

Donna, so sorry to hear about the loss of your mom. She was a wonderful woman. My condolences to you and your family.

Hi Linda. Such sad news, my condolences to you and your family. Sorry for your loss, I know how special she was. Hope everyone is keeping safe. Lida

May your Mom RIP. I hope that you are well, things are good for me, would love to hear from you. Hugs,
Nancy B.

Sending sympathy and love to you and your family for your loss!
Trish

Linda, Shannon and All the Family and Families...

Deepest sympathies on this Big loss in your lives!
In my thoughts and prayers
Ann Johnston Beriau

Dear Donna:
I am so sorry to hear of your sweet Mom's passing.
Sending you & your family much love & healing, at this sad time.
Please give me a call or text when you can @ 778-344-1552.
With love,
Suzan Viner-Warkentin

Sorry to hear about the loss of your mom. Sending love to you and your family

Dear Donna and family
I would like to extend my deepest sympathy to all of you. Your mom was an extremely special person and although I was very young she really impressed me from the start. I remember one day you invited me for lunch and when we arrived your mom had the dining room table all set and she served us a beautiful lunch. Amazing

Donna, Linda, David and all the family

So sorry to hear of your loss. I will miss Joan very much every summer, with her enthusiasm, determination and inspiring encouragement. All of a sudden her generation is gone… in both of our families. With all my love..