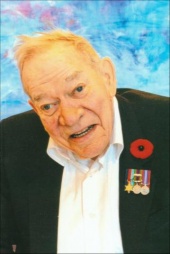 James Stewart Kelleher, 91, died peacefully November 24 at the Perley Rideau Veterans' Health Centre in Ottawa, surrounded by the love of his family and caregivers. Jim was born to the late Ruben and Florence "Dot" (Holmes) Kelleher, Nov. 6, 1924, in Canora, Saskatchewan. He grew up in Brandon, Manitoba, completing high school there before serving in the Royal Canadian Navy during WWII. He received his BSc in Biology from the University of Brandon, his MSc from the University of Iowa and his PhD from the University of Minnesota. He married the late Anne Evaskow in 1952 (d1975), and, after finishing his studies in 1959, they lived together in Brandon, Belleville, and Ottawa. He married the late Murielle Pepin (d2002) in 1990, and they lived in Dorval. He overwintered in Chapala, Mexico for years, spending the rest of his time with his daughters scattered across the country, or in his home town, Brandon. In 2011 Jim moved to Ottawa, where he lived his last years in dignity as a Navy Veteran in his long-term care facility. Jim was an entomologist with Agriculture Canada for 43 years and his work focused on using biological controls rather than pesticides to manage harmful insects, long before much concern about pesticide use. His work had an international scope, and for both work and pleasure he was an avid traveler, enjoying meeting new people and experiencing new cultures. Jim was a humble man of quick wit, always willing to help family and friends when they needed it most. Jim was an active member of the Catholic community wherever he lived. Jim's family always said he had nine lives, overcoming numerous challenges, including: childhood rheumatic fever, WWII Navy combat aboard the HMCS Kirkland Lake, a major penicillin reaction following treatment for a head wound received diving in the 1960's, punctured lungs and a broken sternum received as a passenger in a head-on car collision on a Montreal highway in 1990, congestive heart failure and lymphoma in 2009, and three bouts of cancer while in Ottawa in 2001, 2012 and 2014. Despite end stage dementia, his mind continued to have cognizant periods when he recognized and comforted his family and caregivers. Even in his last hour, Jim smiled and waved goodbye to those in the room. His remains were removed with military honours, and the flags at the Perley were lowered to half-mast to mark his passing. Jim is survived by three daughters, Mary Jane (Colin Leech) of Ottawa; Joyce (Dusty Williams) of Black Diamond; and Angela (Dave McIntyre) of West Vancouver; one granddaughter, Jessica (Greg) Dacyk and two great-granddaughters Logan and Hollyn all of Clear Prairie, AB; two sisters Mae Cotter, Twyla (Al) Warwaruk; two brothers Jack (Marion) and Pat (Joan); and many other relatives. In lieu of flowers, the family is requesting that donations be made to St. Augustine's Church, Brandon, or the Perley Rideau Veterans' Foundation, Ottawa. The funeral mass will be said by Fr Patrick Neufeld on Tuesday December 8th, 2015 at 11 a.m. at St. Augustine of Canterbury Church in Brandon, MB followed by private burial at Brandon Cemetery. Prayers will be offered at the church at 8 p.m. the night before