Martin, Q.C., The Honourable Leonard A.

MARTIN, Q.C., The Honourable Leonard A. 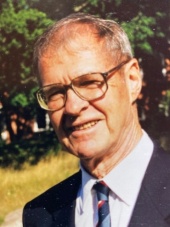 Born in Corner Brook, Newfoundland, March 1931; died in Ottawa, Ontario, May 2021. Predeceased by his father Albert, mother Margaret, sisters Peggy and Gertrude, and stepmother Loretta. Survived by his loving wife, Heidi, to whom he was dedicated for 63 years, and their children: Krista (David), Robert (Lynn) and J. (Debbie) and grandchildren Jessica and Shelby, Sarah and Amber, and Zachary; and by his sisters Joan and Catherine.

Leonard was admitted to the bars of Nova Scotia (’55) and Newfoundland (’56), and founded a general law practice in Corner Brook, NL in 1956, initially with partners Gordon Easton, Frederick Woolridge and Edward Poole, and later joined in the early 1970’s by Paul Althouse, Noel Clarke, Carl Thompson and Leonard Thomas. Led by Leonard’s example, the partners were not only business associates but also close friends for many years. Leonard was a well-respected corporate and trial lawyer throughout the Province, known for his in-depth preparation, knowledge of the applicable law and his soft-spoken determination.

From 1978 to 1985 Leonard’s law practice was focused on special assignments, e.g., Counsel for the Coast Guard Radio Operators in the formal investigation of the loss of the F.V. Cape Royal, Commission Counsel for the formal investigation into the loss of the F.V. Barricudina, Lead Counsel for the Attorney General of Newfoundland in the Upper Churchill Water Rights Reversion Act reference to the Appeal Division of the Supreme Court of Newfoundland and then on to the Supreme Court of Canada, and Lead Counsel to the lengthy and very detailed inquiry of the joint Federal-Provincial Royal Commission on the Ocean Ranger Marine Disaster. He was appointed to the Trial Division of the Federal Court of Canada in 1985 and moved to Ottawa with Heidi.

Although he went to high school and university in Toronto (U of T ‘52) and to law school in Halifax (Dalhousie ’55) and ultimately moved to Ottawa, Leonard was a true Newfoundlander. While living in Newfoundland he enjoyed many travelling adventures with Heidi and his children, skiing at Marble Mountain, and sailing the waters around Pilley’s Island and beyond (to the Funk Islands and back in ’85) with his family and friends. Good times were also had at the barn/farm at Humber Village to which Leonard devoted many hours, supported by his trusty green pickup. Following his retirement and living in Ottawa, Leonard enjoyed road trips with Heidi, visits from his children and grandchildren, woodworking with his friend Gordon, cross-country skiing, riding his motorcycles, feeding the wildlife on the back deck, and gardening (including some very interesting plants).

Our family is grateful to the wonderful staff at St Patrick’s Home in Ottawa for their exceptional care of and support for Leonard over the past five years. For anyone wishing to make a donation in Leonard’s memory, please consider the St Patrick’s Home of Ottawa Foundation - https://stpatsfoundation.ca/ways-to-give/; cards may be addressed to the family c/o St. Pats at 2865 Riverside Drive, Ottawa, ON K1V 8N5.

Cremation has occurred. There will be no separate funeral arrangements under the present circumstances.

I wish to express my condolences on the passing of Mr. Martin. I saw the obituary in the St. John’s newspaper. Although I never met him, he was my god-father. I believe his mother and my grandmother (Gertrude Paddon nee Edens) were sisters.