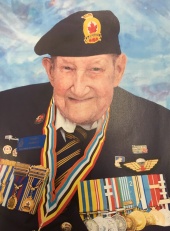 Peacefully at the Perley and Veteran’s Centre on August 17, 2019 at the age of 87 years. Beloved husband of Donna. Loving father to Patricia (Kevin) and cherished grandfather to Autumn, Gabrielle and Eoghan. He is also survived by his brothers and sisters Ronald (Dorothy), Doreen, Janet, Michael (Wendy) and Jackie as well as many nieces and nephews.   He was predeceased by his brother Gordon (Sylvie). Danny served in the Korean War RCR 2nd Battalion. Upon returning home he remustered into the Service Corps and eventually retired from his position as a Warrant Officer on June 30th of 1977.   A Celebration of Danny’s Life will be held at the Royal Canadian Legion Branch #462, 194 Cyr Ave. Ottawa, on Thursday September 19th, 2019 at 11:00 a.m. If friends so desire memorial tributes in memory of Danny may be made to the Canadian Cancer Society. Condolences/Tributes may be made at www.fco-cfo.coop.

So sorry for your loss Donna
My condolences to you

Donna,
At this stressful time I offer you my sympathy.
As an ex Dragoon, I respectfully salute you, "Danny Boy"