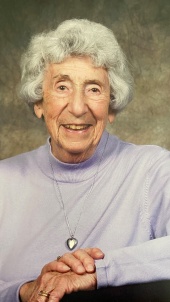 Doreen was predeceased by her husband of fifty-one years, William Hall, her sister Eileen Claassen and her son-in-law, Tom Sloat.

Doreen was born May 12, 1924 in Liverpool England to John and Sarah (nee Hill) Scanlon and attended St. Edmund’s College, Liverpool. After graduating Doreen completed a three-year apprenticeship in 1945 with Cammell Laird and Co. Ltd. (shipbuilders) as a Technical Tracer for ship-building plans and then practiced her trade from 1945-48 with Imperial Chemical Industries and from 1948-50 with the North West British Electricity Board.

Doreen married William Hall on Feb. 18, 1950 in Liverpool. With a young Marion, Doreen and Bill emigrated on the Ascania II, arriving at Halifax’s Pier 21 in 1952, and continuing on to Toronto where they made their home for several years.

In 1960, the family, now with John, moved to the Hamilton escarpment. Doreen was active in the Home and School Association, at the local and provincial level, and in the I.O.D.E. The family spent many happy days at Hamilton’s Botanical Gardens and woodland trails, Niagara Falls and the fruit orchards, and on the sandy beaches of Lake Erie. Doreen was an accomplished seamstress and kept everyone in the family beautifully clothed.

In 1966, the family moved to Scarborough, where they enjoyed the boardwalk along the Toronto Beaches as well as the Scarborough Bluffs. From 1967 to 1973, Doreen worked as a technical tracer with the Canadian Underwriters Association. In 1974, Doreen joined many of her friends and worked for Bell Canada until 1985. While in Scarborough, Doreen and Bill were active members of St. Peter’s Anglican Church where they happily helped in many community improvement activities. They enjoyed an active social life with St. Peter’s Married Couples’ Club as keen members of the entertainment committee that created and performed skits and songs. Most vacations were spent visiting her sister Eileen’s family in the Philadelphia area, memorable for many day trips to the New Jersey shore for ocean fishing and swimming. Doreen and Bill hosted regular dinners for their many long-time friends, some of whom they knew from their days in England, as well as the many friends they made in Canada. Doreen and Bill always warmly welcomed friends of Marion and John into their home.

Doreen and Bill moved to Ottawa in 1998 to be closer to their children and grandchildren. Sadly, Doreen lost her beloved William in 2001 but stayed on in their house becoming a neighbourhood fixture cheerfully looking after her gardens and chatting with the passing neighbours. Her walking speed was legendary even as she began to use her four-wheel walker. She had a reputation of being kind yet sturdy in her ways although she did meet her nemesis in Juno the golden retriever who was the only being that was able to successfully get his way with her without fail by stopping and sitting down near the end of a walk and not moving until she gave him a little treat.

After 96 years of good health and independence Doreen suffered a spontaneous fracture of her right femur in June 2020 which began a difficult period of recovery and rehabilitation made much more frustrating because of COVID quarantines and isolation due to restrictions on visitors. Doreen expressed how grateful she was for the medical care and personal attention that the staff at Montfort and Bruyère Hospitals faithfully provided to her. In September 2020, Doreen was released from hospital care and moved to independent living at Beacon Heights Retirement Residence. With their watchful care, Doreen regained her independence as much as possible and persevered, always aiming towards her steadfast goal of returning to her house. To everyone’s disappointment however, it was not to be. A heart attack set her back in April 2021 and confined Doreen to a wheelchair full-time. That did not stop her of course and the staff and her community at Beacon Heights brought her much appreciated comfort, support, care and company. As COVID restrictions eased, family was able to make regular, daily visits. However, Doreen succumbed to the effects of her weakened heart and peacefully passed away at Montfort Hospital on July 10, 2021 in Ottawa, aged 97 years.

A celebration of life for Mary Doreen Hall will be held in late September.

In lieu of flowers, donations can be made to Montfort Hospital or to Élisabeth Bruyère Hospital in Ottawa.

I want to offer you both, and your family, my sincere condolences for the death of Mary Doreen. She will be missed, that I am sure.

Very sorry to hear; she will be missed. I remember so many Christmases spent with her, and she was always so open to talk.

John and Francine and Family

Our sincere condolences on the death of your mother. Although I never had the privilege to spend much time with her, I was always impressed at your dedication to her and her active participation in and contribution to your lives. May the memories that she leaves with you support you now and in years to come.

On behalf of the Byng Club members, I would like to pass on our sympathies for your loss.

What a fantastic and long life she had; and that is a beautifully written story. The cherished memories will live forever.

Peter and Sheila extend our heartfelt condolences to John , Francine, Gabrielle , Daniel and Marion and JT on the passing of your mom .
I remember many visits with your family in Scarborough and also in Ottawa. She was always cheerful and ready to welcome us into her home. She lived a long and loving life.

Doreen was always so cheerful and energetic and as a neighbour I was always happy to see her busy at some task or other around the front of the house even though she was in her 90s. Rhona, Eamonn, Clare and I are very sorry for your loss.

Deepest condolences on the passing of Auntie Doreen.
Lots of fun times and giggles to look back on and we hope they will sustain you at this sad time.